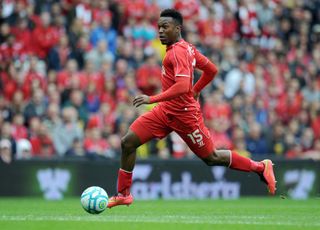 Liverpool have been on the lookout for a star striker following Luis Suarez's departure to Barcelona and their search appears done, with  enigmatic Milan frontman Balotelli on the verge of sealing a transfer to Anfield.

Balotelli has led the line at Inter, Manchester City and Milan, and at international level with Italy, raising doubts over Sturridge's status at Liverpool, despite scoring 36 goals in 50 appearances since leaving Chelsea in January 2013.

However, Rodgers stressed the importance of the England international to his plans and he is adamant another fine partnership can be forged on Merseyside after Sturridge's exploits alongside Suarez.

"I have spoken to Daniel about how important he is to the team," Rodgers told reporters ahead of Monday's trip to defending champions City.

"I have said repeatedly that Daniel is a top talent, but we need to have more than one top talent in here. But he is a big player for us and will remain to be."

Rodgers added: "The dynamics are important but I don't worry because if you are a top player with a top mind then you want other top players.

"If you are a top player and looking at another top player coming in then you will be thinking, 'He can help us.' A top player with a top mentality responds to the competition.

"We can also play a diamond. We played that eight times last year and won seven, and we flipped to that against Southampton. We can change systems and I need that flexibility.

"Also, if you look at Daniel's injury record, then he has missed a number of weeks through being injured. I need to ensure I have got the replacements if they are not on the pitch at the same time."