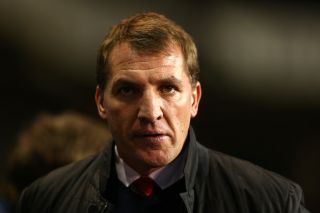 Daniel Agger's first-half header was added to by Luis Suarez's magnificent free-kick five minutes after the break - the Uruguayan's 20th goal of the season - as Liverpool bounced back from successive league defeats at Manchester City and Chelsea.

After the game, Rodgers heaped praise on his players, underlining the importance of the result.

"I think it was our best win of the season," he said.

"We might not have been at our best but we scored two great goals and created other opportunities and I'm pleased because it was a great victory for us.

"It was very much a team effort today. It was a great header from Daniel Agger and that set us off.

"We worked tirelessly today to stop them getting anything. There was no shots on target but the most important thing was the victory and the goals and we got that."

Rodgers also reserved special praise for Suarez, who he revealed came into the game carrying an injury.

"Today was very much about the team, but Luis will always get the plaudits because he's a world-class player," he said.

"He had a big strapping on it and put himself out there for the team yet again and that's why he gets the goals he does because he's so determined."