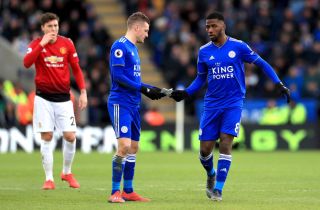 Brendan Rodgers has talked up the importance of Leicester forward Kelechi Iheanacho ahead of Tuesday’s Carabao Cup semi-final, second leg at Aston Villa.

The Nigerian continued his remarkable scoring record this season with a seventh strike of the campaign in the 1-0 FA Cup win over Brentford on Saturday.

It booked Leicester’s spot in the fifth round and was just Iheanacho’s 12th outing this term, but he could be set for another in the week.

Jamie Vardy is making “good progress” after sustaining a glute injury on Wednesday against West Ham and yet if he fails to recover, the Foxes boss knows the former Manchester City striker is a ready-made replacement.

Rodgers said of Iheanacho: “He has worked very hard in training and knows he has the confidence of the coaching staff and everyone at the club.

“I also think it is natural and takes time. He made a big move, but hadn’t actually played a lot of football so for a young player, he needed games and confidence. It all stems from training.

“He has trained ever so hard and works so hard and now he has become really efficient where he is creating and scoring goals.

“It is brilliant for him because it was a difficult period when he came, but he is very much an important player for us.”

After moving to the King Power Stadium in the summer of 2017 for a reported fee of £25million, Iheanacho netted eight times in all competitions during his debut campaign.

The 23-year-old found life much harder last season and finished the term with only two goals from 35 appearances.

He endured a barren run of form which only ended at Luton in September when he found the net for the first time in 12 months and subsequently halted a run of 28 matches without a goal.

But while impressed with the hitman, Rodgers also knows the areas where he has to improve, adding: “He works with intensity and understanding.

“Defensively he wasn’t so good in the first half and switched off a number of times.

“We said at half-time we’ve let them out too easily so that is an area where he is improving, that tactical side, but he wants to score goals, he has pace and power and is a great asset for us.”

The former Liverpool manager admitted nothing from the cup tie at Griffin Park changed his thinking ahead of the second leg with Villa.

A win on Tuesday will send Leicester to Wembley and they only need two more victories in the FA Cup to reach the semi-final and book another date under the arch in April.

“I said when I came in I was pretty greedy to do the best I could for the club and create a mentality that sees you go into every game and every competition to win,” Rodgers added.

“We know the level and teams and the standard. We are into one semi-final, we are one game away from a quarter-final and our attitude is to win every game.

“Of course we want to do well in the league and we know going forward if we are going to compete in a European competition as well then we need a bigger squad, but the players have been first class and in every game we’ve tried to give everything to see where it takes us.”