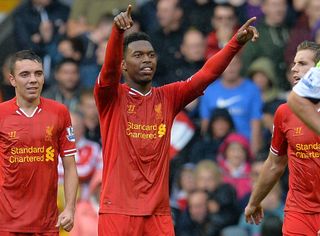 England international Sturridge grabbed the only goal of Saturday's Premier League opener at Anfield with a fierce 25-yard-drive that evaded man-of-the-match Asmir Begovic and nestled in the bottom corner.

But after dominating proceedings for much of the match, Liverpool nearly came undone when Stoke were awarded a penalty in the 88th minute as Daniel Agger was adjudged to have handballed Charlie Adam's free-kick.

However, Mignolet ensured Rodgers' side would take home all three points with a terrific double save from penalty taker Jon Walters and Kenwyne Jones on the follow-up.

And Rodgers was thrilled with the duo's contribution to a deserved win for his side.

"Considering he's (Sturridge) only been back just over two weeks, it was a great credit to him," the manager said.

"He played 90 minutes in midweek behind closed doors, so to come out and play another 90 today (was impressive).

"Just at the point he scored, I made a note for him to take more shots. It was a real good move, to get the space and the power. He's disappointed he didn't get more but he continues to score and that's why he's here that's his job."

On Mignolet, Rodgers added: "He made three terrific saves. When you get the penalty against you at the end you get a sinking feeling.

"But he did his homework - he knows where all the penalty takers are going, he made a good first save and then obviously the second action to get up and make the double save was impressive."

The Northern Irishman also refused to be drawn on whether Luis Suarez had apologised to his team-mates before his return to training on Friday.

The wantaway Uruguay international is still serving a ban for his bite on Chelsea's Branislav Ivanovic last season and had been banished to training alone as he seeks a transfer away from the club.

"The concentration is on the players who are available to play," Rodgers added. "Luis is doing his work, there is nothing to be said there.

"I'm very satisfied with how everything has been resolved, as a club we are looking to the future and moving up."