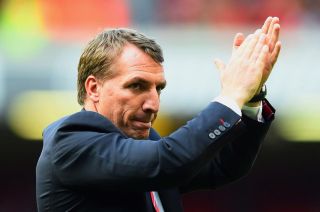 The Northern Irishman guided the club to a seventh-place finish in his first campaign at the helm, but 2013-14 saw a rapid improvement as Liverpool came agonisingly close to a first league title since 1990.

They had looked on course to end their 24-year wait until a defeat to Chelsea and a draw at Crystal Palace allowed eventual champions Manchester City to overtake them and claim their second crown in three seasons.

Despite just falling short in their title bid, LMA chairman Howard Wilkinson praised the job done by Rodgers, insisting he was well worthy of the award, voted for by his peers.

"There can be no greater tribute to a manager and his work than a tribute awarded by his match day foes and peers," he said.

"This evening we applaud Brendan Rodgers as he receives that most valuable award.

"Liverpool Football Club's performances and results this season have provoked memories of some of those momentous years in the past.

"For Liverpool and Brendan, I'm sure we all hope this season marks the beginning of a new voyage and a new era."

Tony Pulis, who took over from Ian Holloway at relegation-threatened Crystal Palace in November and guided the club to an 11th-place finish, picked up the Premier League Manager of the Year award.

Nigel Pearson, manager of Championship champions Leicester City, picked up the division's prize, while Kenny Jacket of League One champions Wolves and Russell Slade, of third-placed Leyton Orient, shared the award for the third tier.

Scunthorpe United's Russ Wilcox, who guided the team to second place and automatic promotion, won the League Two gong, while also picking up a Special Merit Award for overseeing a record-breaking 28-match unbeaten run to begin his Glanford Park reign.