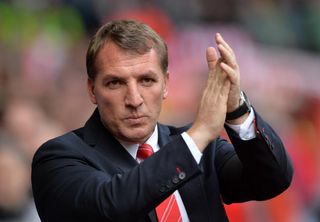 Rodgers' men lacked the fluency and attacking spark they showed last season in an unconvincing triumph that was only sealed with 11 minutes left when Daniel Sturridge poked in from close range.

Earlier, Raheem Sterling's opener had been cancelled out by a Nathaniel Clyne effort and at times, Southampton looked the more likely of the two sides.

But Liverpool - who faded late to finish second in the Premier League last term - did just enough, with Sturridge's predatory instincts around goal proving crucial.

And Rodgers felt the nature of the match made Liverpool's win more special.

"We had to grind out a result," Rodgers said.

"Today was a brilliant win for us because it was a tough game. [I am] really, really happy with that determination and character to win a football match.

"As the season rolls on, we'll get better and more fluent.

"[It was] very hard-fought. They're a good side, I don't think you can think that just because they have lost players, that it was going to be a walkover.

"They've got some very, very good players and an experienced manager [Ronald Koeman] that's come in and got them organised. It was always going to be a difficult game. So to get the three points was vital.

"We had to show guts and determination. I thought it was a great win."

Rodgers has added several players to his squad in the wake of Luis Suarez's departure to Barcelona and was pleased that he had the options available to change the match.

"Thankfully today, we could change the game. We got to one [goal] each and I can look to the bench and think we can change the way we work," he added.

"So we flipped to a diamond and put [former Southampton forward] big Rickie [Lambert] on and I think he unsettled them a bit. They obviously know his qualities.

"We started to cross the ball into the box and obviously that led to our second goal, where Raheem wins a great header and Daniel makes a lovely touch on the ball to get the winner."

Rodgers also reserved special praise for goalkeeper Simon Mignolet, who made an outstanding reaction save to deny Morgan Schneiderlin in the closing stages, and revealed that Suarez - top scorer in the Premier League last term - had sent him a text message on the morning of the game wishing Liverpool good luck.