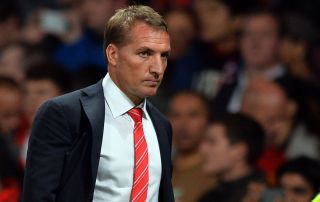 The Merseyside outfit have taken 16 points from their seven matches this season, with their last success coming in a 3-1 victory over Crystal Palace at Anfield before the international break.

But Rodgers was unhappy with Liverpool's performance against Ian Holloway's men, and the 40-year-old insists the team are working hard to improve ahead of Saturday's trip to Newcastle United.

He said: "We'll get better as we grow together more. The Premier League is very difficult.

"I don't just like to get three points – I worry about playing well and in a certain way. That's how I've always been.

"But I can't take anything away from how we've been so far in terms of results. It's difficult to get three points in the most competitive league in the world.

"It shows you how much growth that I think there is in a team that we can win 3-1 but I still come away a little bit dissatisfied with our performance.

"What I can't argue with is the work of the players; how humble they are; how willing they are to come into training every day and be better."

Rodgers also hailed captain Steven Gerrard, who scored the second goal in England's 2-0 FIFA World Cup qualifying victory over Poland on Tuesday to seal the side's progression to next year's tournament in Brazil.

"People talk about Steven Gerrard as a great captain and great leader," he added. "It's easy to forget he's also still a world-class player.

"He's probably the best player I've ever worked with. He can keep up with very high tempos of games. He's world class."

Liverpool head to Newcastle boosted by the return of defenders Glen Johnson and Aly Cissokho from ankle injuries, while Joe Allen is fit after being sidelined with a hamstring problem.

Brazil international Lucas Leiva is also in the squad after sitting out the Palace game through suspension.