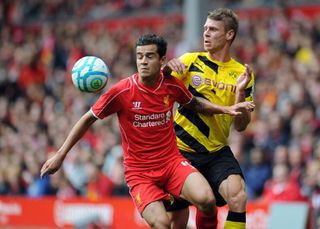 Brazilian playmaker Coutinho has regularly shown glimpses of his ability since arriving at Anfield from Inter in January 2013.

He made 33 Premier League appearances as Liverpool went agonisingly close to winning the title last term, and was the Merseyside club's stand-out player throughout their pre-season preparations after missing out on a place in his country's World Cup squad.

Liverpool will return to the Champions League following a five-year absence in the upcoming campaign and, after watching a virtuoso Coutinho display in his side's 4-0 friendly demolition of Borussia Dortmund on Sunday, Rodgers tipped the 22-year-old to shine on European club football's biggest stage.

"He's so gifted - his ability is magical [and] the weight of his pass is phenomenal," purred the Northern Irishman, who revealed last week that he wants to tie Coutinho down on a new contract.

"He's come into the country and lit it up with his quality. [The important thing for his development] is sustaining that level of performance.

"He's got the opportunity to show he's a top-level player in the Champions League and he'll do that.

"Over the next four or five years, he'll be a big talent in world football for Brazil and Liverpool.

Coutinho was among the scorers as Liverpool routed Dortmund at Anfield, and Rodgers was thrilled with his team's performance.

"[I'm] delighted with the result - they [Dortmund] have been one of Europe's best teams for the last three or four years," he added.

"We were excellent, and this brings to an end what has been a very good pre-season."