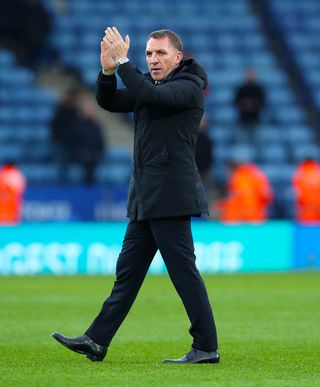 Leicester boss Brendan Rodgers insists he will be heavily involved in appointing a new head of recruitment after Eduardo Macia’s exit.

The former Fiorentina scout will leave the King Power Stadium on Friday, ending his two-and-a-half year spell at the Foxes.

Celtic’s head of recruitment Lee Congerton has already been linked with a reunion with Rodgers, although the former Hoops boss has remained coy.

But he confirmed he will take part in finding the replacement for Macia.

He said: “I’m sure they’ll be a number of candidates. I will be involved. It will be a club appointment but it is important the manager is involved.

“He wants a fresh challenge but is a really good guy, the club will go through  the process of finding a replacement.”

The Foxes travel to Burnley on Saturday sitting 10th in the Premier League, six points behind Wolves in seventh, which could earn a Europa League qualifying spot.

Rodgers is keen to guide the club back to Europe but will not rush his plans.

“I said my first day here my expectation is, in time, to get the club back into Europe,” he said.

“Whenever that is, great. Now I want to stabilise the squad and the team and put in place an identity to become better but whenever it comes you accept it.

“There are a number of games to go and we will finish where we finish but then we’ll have a good preseason and a good run at it next year, but that is what we want to achieve.”

Meanwhile, Rodgers and many of the squad will travel to Thailand next week for the cremation of owner Vichai Srivaddhanaprabha, with his funeral due to end following his death in a helicopter crash at the ground in October.

Rodgers added: “I was made aware of that (Khun Vichai’s cremation) when I came in.

Daniel Amartey (ankle) and Marc Albrighton (hamstring) remain out. Matty James is back in training but is unlikely to feature in the near future.