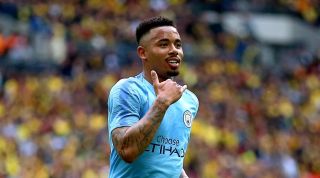 Manchester City may have to sell Gabriel Jesus in order to seal a deal for Atletico Madrid's Rodri, report The Sun.

City are leading the race to sign the Spain international, who is also being tracked by Barcelona and Bayern Munich.

Rodri is available for £65m due to a buyout clause in his contract, but the 22-year-old wants to consider all his options before committing to any club.

Atletico are on the lookout for a new striker after Antoine Griezmann announced his intention to leave this summer.

And Jesus is thought to be at the top of the Spanish side's wish list, with Diego Simeone hoping to snare him away from the Etihad Stadium as part of the deal for Rodri.

The Brazil international started Saturday's 6-0 FA Cup final victory over Watford but played second fiddle to Sergio Aguero for most of the campaign.

Jesus may therefore be open to a move to Atletico, which would make it easier for Rodri to move in the opposite direction.