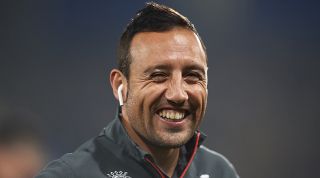 "They told me: 'If you get to walk again with your son in the garden, be satisfied'."

That was Santi Cazorla speaking in November 2017, reflecting on the horrific injury that risked his entire leg – let alone football career. He went through ankle surgery eight times in one year, then suffered through infection, reconstruction and intense rehabilitation to get his football career back on track.

Arsenal didn't have much choice but to release him in summer 2018, but Villarreal were willing to take a chance on their former player – and now he has his reward. After 34 appearances for the Yellow Submarine in 2018/19 – 30 of them starts – Cazorla has been called up to Spain's squad for the first time since 2015. And he'll hope to make a similar impact to the men below...

The Germany striker only missed out on the Golden Boot at Euro 2012 because he’d played more minutes than Fernando Torres, but found himself out of their squad for 2014 World Cup after missing much of the preceding season with a serious knee injury.

Gomez played just four games in over three years for Die Mannschaft, before being recalled to Joachim Low’s squad in November 2015 to kick-start his stalled international career.

The 30-year-old proved he still had plenty to offer at Euro 2016, netting the group stage winner against Northern Ireland, plus a goal against Slovakia in the last 16. He managed to cling on to his place in the squad right through to the 2018 World Cup too, where he played in every game as Germany stumbled out in embarrassment during the group stage.

The Cameroon striker once imprisoned 120 pygmies in the basement of the national stadium, and forced them to play in a novelty football tournament. That should be the only thing anyone remembers about Roger Milla, but he’s better known for his four-goal haul and geriatric dance moves at Italia '90.

Milla was 38 then, and his inclusion in the Indomitable Lions side was controversial. He’d retired from the team in 1987, but returned to the fold after receiving a pleading phone call from Cameroon’s president, Paul Biya.

He came off the bench to drive Cameroon’s unlikely run to the quarter-finals, scoring braces against Romania and Colombia, and setting up two goals in the 3-2 defeat to England. Milla was still at it four years later, taking a break from tormenting pygmies at the age of 42, but managed just the one goal as Cameroon were knocked out in the group stage.

The Boca Juniors striker’s two claims to fame were missing three penalties in a single international game against Colombia in 1999, and breaking his leg after a wall he jumped on while celebrating fell on him. And then Diego Maradona came along.

The playing legend’s time in charge of Argentina was colourful, and his recall of Palermo in 2009 was one of the more surprising incidents. At 35, the frontman hadn’t played for the national team in 10 years when El Diego brought him back into the squad, but he repaid the faith with a crucial injury-time winner against Peru to help Argentina reach the 2010 World Cup.

Maradona (who celebrated the goal with a swan dive in the torrential rain) called it the ‘Miracle of San Palermo’ and promised to take the striker with him to South Africa no matter what – a slight kick in the teeth for Ezequiel Lavezzi. Palermo was very much the back-up option, but with Argentina already through, Maradona brought him on for the last 10 minutes of the final group game against Greece. He managed a goal, tapping in after a Lionel Messi shot was parried, which means (according to the Blizzard, anyway) he has the best goals-per-minute ratio in World Cup history.

The former Manchester United and Chelsea midfielder’s return from the international wilderness was so unexpected that it even caught out South American football expert Mick McCarthy, who didn’t realise he was watching the same player during commentary for the 2010 World Cup (“is that the Veron?!”).

By then, Veron had been back in the international fold for as long as he’d been away, having endured a difficult spell after Argentina’s dismal display at the 2002 World Cup – where they even lost to England.

The central midfielder, who was having a tough time adjusting to the Premier League at club level, was made a scapegoat after that tournament and didn’t win a cap for three years between 2004 and 2006.

A return to South America, and first club Estudiantes, revived his career. He won South American Footballer of the Year in 2008 and 2009, and the influential midfielder impressed in a deeper-lying role at the World Cup in South Africa before retiring from international football after the tournament.

ONE-ON-ONE Henrik Larsson: "The only regret of my career? Spending just two months at Man United"

Most players wouldn’t be able to get away with retiring from international football for the dull qualifying schleps around Europe, and then un-retiring just in time for the glory of a major tournament. They certainly wouldn’t be able to pull off the same trick twice.

But then most players aren’t Henrik Larsson. The cult Swedish striker initially retired from international football at the age of 31, after the 2002 World Cup. He played once in 2003, in a qualifier against Hungary – as a favour to the management because Zlatan Ibrahimovic was suspended – but rejected a plea from then-UEFA president Lennart Johansson to come out of retirement for Euro 2004.

However, he soon changed his mind and ended up with three goals and a place in the team of the tournament. He retired again after the 2006 World Cup but was lured out of retirement for Euro 2008, before ending his Sweden career in October 2009. We think for good, now.

NEXT PAGE: The best way to never get asked back...

Creative differences with coach Richard Moller Nielsen led to Laudrup – surely Denmark’s most gifted player – walking away from the national team during qualifying for Euro '92. Although only 26, he’d already been an international regular for eight years.

While his team-mates were on their way to winning the tournament – after getting a late call-up to replace Yugoslavia – he was on holiday in St Lucia and New York, constantly trying to get goal updates from indifferent barmen.

He finally returned to the side in August 1993, after almost three years out, and helped Denmark win the Intercontinental Cup in 1995 – a precursor to the Confederations Cup. Alongside brother Brian, he was named in the All-Star Team at the 1998 World Cup, after captaining Denmark to the quarter finals.

An injury to first-choice goalkeeper Ahmed El-Shenawy in Egypt’s first game of the 2017 Africa Cup of Nations meant a return to the side for 44-year-old Essam El-Hadary, who became the oldest player ever to feature in the tournament.

El-Hadary had originally retired in 2013 after falling down the pecking order, and although he wasn’t expected to feature, he turned out to be one of Egypt’s stars as they reached the final (where they lost to Cameroon, sadly for him). The keeper had a daughter the same age as his team-mate Ramadan Sobhi, but saved two penalties as Egypt beat Burkina Faso in the semi-finals, and only conceded three goals in the entire tournament.

He made it through to the 2018 World Cup too where, aged 45, he became the oldest player ever to play in the tournament – and even saved a penalty against Saudi Arabia in Egypt's final group game. In August he retired for good, understandably chuffed with his achievements.

The defender was already Germany’s most-capped player of all time, but feuds with Jurgen Klinsmann – who took over from him as captain – and Berti Vogts meant his international career seemed to be over.

Although he never officially retired, it was a surprise when Matthaus was recalled to the side after three years for the 1998 World Cup, becoming the second player to appear at five editions of the tournament (and the only non-goalkeeper).

He helped Germany reach the quarter-finals and remained in the team for Euro 2000, which didn’t go quite as well. Germany crashed out in the group stage, losing to England who went out with them, and Matthaus’s international career ended at the age of 39.

STORY Michael Owen: “After France '98, I’d get home at 1pm every day and sit there until 11pm replying to mail"

With nothing else to win, the influential French trio retired en masse from international football after Euro 2004, but were persuaded to return by Raymond Domenech in late 2005.

It was a masterstroke. After labouring through qualifying (undefeated, but with five draws against Israel, Ireland, and Switzerland) they turned it on at the tournament proper, knocking out Spain, Brazil and Portugal to reach the final.

Thuram and Makelele even returned under Domenech for Euro 2008, while Zidane’s playing career ended with that headbutt on Marco Materazzi in the World Cup final. It’s one way to make sure you don’t get asked back, we suppose.

FEATURE Why signing Antoine Griezmann is a major gamble for Barcelona