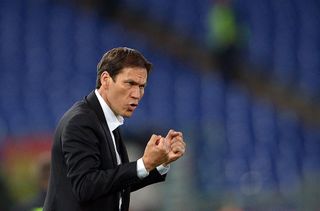 Miralem Pjanic and Gervinho struck for Roma at the Stadio Olimpico to see Garcia's men move to within five points of Serie A leaders Juventus, who visit Sassuolo.

Garcia said his team's title chances were still alive thanks to the win, and hopes Juventus' UEFA Europa League loss at Benfica makes it harder for Antonio Conte's men on Monday.

"After this great victory, I prefer to talk only about beautiful football. I am happy, as we beat Fiorentina and Milan, two quality teams," the Frenchman told Sky Sport Italia.

"Above all, we can continue to dream.

"We'll see what Juventus do and it'll be tough for them against Sassuolo, as this fixture is between the Europa League semi-finals.

"I know it’s always harder to play before or after a European game, so this time Juve have both."

Garcia was far from impressed by his side's display, particularly in the second half – with Gervinho sealing the result on 65 minutes.

"The first 15-20 minutes we made too many mistakes and moved the ball around very slowly, but we improved over the half," he said.

"There was that wonderful goal from Pjanic, at the break we told each other we'd have to start the second half in better shape, but to be honest I didn't like the second-half performance very much."

Garcia said Pjanic's goal deserved to be admired around the globe.

"Normally a goal like this has to go round the world," he said.

"If it's a player like Maradona then it will, but Mire is a fantastic player and I hope everyone all over the planet can enjoy this goal."