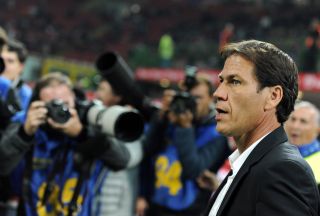 The league's top two teams meet at the Stadio Olimpico on Friday, with neither side having lost in the league in the current campaign.

However, Garcia believes current holders Juventus and Inter will both threaten at the Serie A summit.

"As I've already said, in Italy there are many experienced managers," he said.

"We should not forget that Juventus won six matches and drew once and Napoli as well. Inter Milan also started the championship in a very good way. We'll see how the situation develops at the end of the season.

"Tomorrow's match isn't a match between Benitez and Garcia, the match is Roma against Napoli, nothing more."

Roma have conceded just one goal in the league all season and sit two points clear of Friday's opposition.

However, Garcia believes Napoli's forward line will pose a significant threat with Marek Hamsik (five goals this season) and Gonzalo Higuain and Goran Pandev (three each) in impressive form.

"Napoli has many skilled players in the forward department, the team is well balanced, and they have a strong goalkeeper," Garcia added.

"They like to keep possession. It will be great to see the performance of these two teams.

"I believe that in every match there is always a moment when you have the chance to win and we should use this moment to our advantage.

"We have to be extremely concentrated in order to win this match. Concentration, rhythm and enthusiasm will be very important in this match."