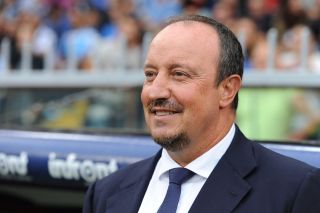 The Spaniard takes his Napoli team to the Stadio Olimpico to face a Roma side that have yet to drop a single point from their seven top-flight matches.

Benitez's men have also started the campaign in impressive form, winning six of their seven games with the only blip being a 1-1 draw with bottom side Sassuolo last month.

But the former Liverpool boss insists the fixture will have little bearing on the final standings.

Speaking to Il Mattino, he said: "There are a lot of matches in Serie A and it is a race based on resistance.

"The championship is won at the end of the season, not on Friday night."

Benitez moved to the Stadio San Paolo in the close-season, replacing former incumbent Walter Mazzarri, who took the vacant post at Inter - one of Benitez's former clubs.

And the 53-year-old is looking to build a culture of success in Naples.

"We have to remain close to perfection in an effort to win something," he added.

"That is our message - we want to be strong as a team and a club.

"Rather than winning once, I'd prefer to remain at the top for five years."