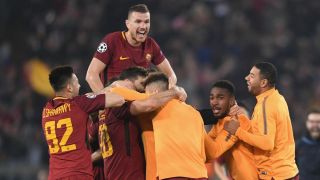 Roma will return to the Champions League next season after they were assured of a top-four finish in Serie A by Inter's loss to Sassuolo on Saturday.

Eusebio Di Francesco's side were at risk of slipping out of the top four over the final two fixtures, but the Nerazzurri's home failure eased all pressure ahead of Juventus' visit to Stadio Olimpico on Sunday.

Roma can now look forward to building on the remarkable run that saw them unexpectedly reach the semi-finals of the Champions League this season.

They captured the imagination with an incredible quarter-final comeback against Barcelona - overcoming a 4-1 first-leg defeat to prevail on away goals - before Liverpool proved too strong in the final four.

Speaking ahead of the Juve encounter, Di Francesco stressed the importance of competing at the highest level in Europe.

"The primary objective is to enter the Champions League, both because of the prestige but also growing the mentality," he said.

"It's not to send a message to anyone else, but to ourselves and to help build our ambitions. I think Roma have grown a great deal over the last year, but there's a long way to go yet."