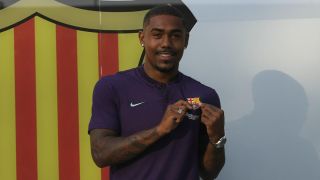 Roma have reacted to their failed pursuit of new Barcelona signing Malcom by giving him the social-media silent treatment.

The Italian club missed out on landing the 21-year-old Brazilian winger, despite agreeing a €40million fee with Bordeaux, after Barca stepped in and persuaded him to move to Camp Nou instead.

Roma will get a look at the one that got away when they meet Barcelona in the International Champions Cup at the Dallas Cowboys' AT&T Stadium on Tuesday.

However, the Giallorossi have no intention of finding out if Malcom's performance will cause any social-media buzz after muting a series of words related to the man that snubbed them for their next opponents.