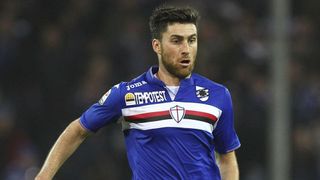 Ervin Zukanovic has completed his move from Sampdoria to Roma after the Serie A clubs agreed a loan move until the end of the season.

The Bosnia international only arrived at Samp in July after impressing for Chievo last season, but he has been allowed to leave the strugglers and link up with Luciano Spalletti's side.

Zukanovic – who scored three goals in 16 league appearances during his spell at Luigi Ferraris – initially moves to the Stadio Olimpico on loan, however Roma have the option to make his switch permanent at the end of the campaign.

Roma will pay Sampdoria €1.2million for the temporary move until June 30, with a €2.8m fee agreed should he impress in the capital.

"Everyone dreams of playing for a huge club like Roma and I have managed to achieve that," he told Roma TV. "This is a big milestone in my career and I'm very happy."

Zukanovic could go straight into Roma's squad for their clash with Frosinone this weekend, and he is looking forward to playing alongside international team-mate – and close friend – Edin Dzeko.

"I grew up with Dzeko, as we were kids together in a Bosnian team, now we play together in the national side and at Roma. It’s wonderful," he told the club's radio station.

"He scored so many goals for Bosnia and is also a good lad, so along with Miralem Pjanic will really help me settle in. We hope to do well together."