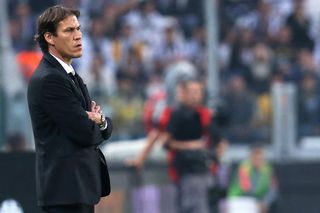 A late Leonardo Bonucci winner gave Juve a 3-2 success in Turin prior to the international break, helping Massimiliano Allegri's men into a three-point lead at the summit.

Alvaro Morata and Kostas Manolas were both dismissed in a game that saw three penalties awarded and Garcia sent to the stands following an angry reaction to one of the spot-kicks.

Despite the fixture making the headlines largely for disciplinary matters, Garcia claims he saw enough from his side to suggest Roma will win the Scudetto this season.

"In that game, I saw a Roma side that was stronger than Juve," he explained ahead of Saturday's meeting with Chievo.

"This game made me realise who will win the Scudetto. We are stronger than Juventus.

"Because we are stronger, we have to win tomorrow, because we have to talk about results.

"The fans must be on our side if we're to win the Scudetto because we have to win tomorrow and the game after that and so on.

"Why do I think we'll win the Scudetto? I have my reasons, I'm sure you can figure them out."

The defeat to Juve ended Roma's winning start to the league season and leaves them second, with Garcia's side also second in Group E of the UEFA Champions League ahead of Tuesday's clash with German champions Bayern Munich.

Garcia explained he had worries over the effect the media attention around the Juventus game and next week's European clash in Bavaria could have going into the weekend's league fixture.

"I am concerned about the game [on Saturday] because it comes after all the media furore and before the Champions League game [against Bayern Munich]," he added.

"I am the guide, the leader of the pack, but they are the wolves.

"When they go out to play they must be aware of their strengths, and show those strengths on the field."