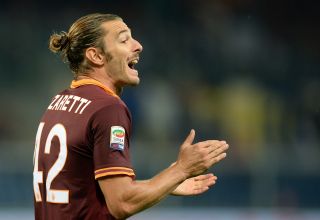 The 32-year-old has not featured for Rudi Garcia's charges since a 1-1 draw with strugglers Sassuolo on November 10.

Roma have subsequently decided the best course of action is for the Italy international to have an operation, which will take place in Boston, United States.

"Due to a condition of on-going and persistent pain, Federico Balzaretti has gone to visit a specialist in the United States," read a statement on Roma's official website.

"With the aim of the quickest recovery possible, the player, in accordance with the club and medical staff, will undergo an operation in the coming hours for a small sports hernia in the left groin area in the 'day surgery' ward of UMass Hospital in Boston."

No timeline has yet been put on a return for the former Juventus and Fiorentina player.

Roma have enjoyed a superb campaign in Serie A and sit second with 47 points from 20 matches, while the club have also reached the semi-finals of the Coppa Italia courtesy of a 1-0 triumph over Juve on Tuesday.