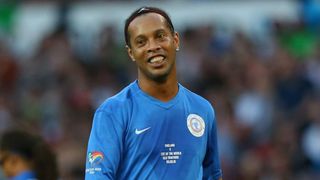 Kevin-Prince Boateng has described Ronaldinho as the best footballer he ever played with, hailing the Brazilian as even better than Zinedine Zidane, Diego Maradona and Pele.

The Las Palmas midfielder, who played with Ronaldinho at AC Milan, said the 36-year-old was past his best when he first signed for the Serie A club.

But despite his advanced age, Boateng insisted Ronaldinho still had so much quality it placed him above other legends of the sport.

"Who's the best player I've ever played with? Ronaldinho no doubt," he told Fox Sports.

"When he arrived at Milan he had no great desire or was tired and was no longer the Dinho of before. But what he wanted was for people to see that he was the best player in the world. More than Zidane, Pele and Maradona.

"He wanted to hit the crossbar three times and did it. We wondered how it was possible there was so much talent in one body. It was unbelievable."

Boateng also recalled his favourite highlights of his time at San Siro, although he insisted leaving the club was the right thing to do for his career.

"The most beautiful moments I spent at AC Milan have been three: when we won the league title, the goal against Barcelona and when I did Michael Jackson dance at San Siro," added Boateng.

"I thought a lot before leaving Milan, they are a team of my heart, but for me at that time was the right thing to do.