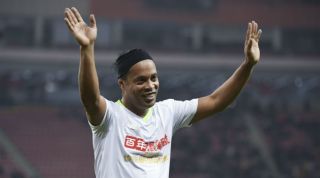 Former Barcelona and Brazil icon Ronaldinho has checked into a Paraguayan jail and was offered a place in a football tournament organised by inmates.

Ronaldinho was arrested in Paraguay last week when he and his brother were found to be using fake Paraguayan passports.

The reason the Brazilian was travelling to Paraguay was to attend the launch of his new book 'Genius of Life'.

Having been caught, the former Barcelona, AC Milan and Paris Saint-Germain player faced trial in the South American nation.

On Tuesday, judge Gustavo Amarilla decided Ronaldinho must remain in a Paraguayan prison while the investigation continues.

"That is one of my [legal] reasons, the requirement that he is present in the country and to continue the investigations with him being present," Amarilla said.

Whilst inside the prison, Ronaldinho could fill his time by playing football in a tournament set-up by the inmates.

According to Paraguayan media outlet Hoy, Ronaldinho was told he could play in the tournament on one condition: he wasn't allowed to score goals.

During his program on the ABC TV channel, journalist Iván Leguizamón reported that several of the team captains tried to "sign" the 39-year-old for their respective teams.

It is claimed, however, that Ronaldinho was unwilling to participate the tournament following his set-back of remaining in the facility for longer than anticipated.

The tournament itself is said to involve 15 teams, competing indoors in a five-a-side format.

According to the report, the tournament is encouraged by officials as it is seen as a stimulating form of recreational activity, as well as exercise, for the inmates.

The only caveat is that the inmates must pay for or make the equipment needed.