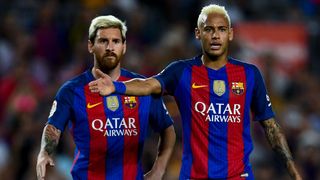 Neymar will one day be the best player in the world, according to former Barcelona and AC Milan star Ronaldinho.

Brazil forward Neymar was included in the three-man shortlist for the 2015 FIFA Ballon d'Or alongside Barca team-mate Lionel Messi and Cristiano Ronaldo.

Messi took the trophy – the fifth of his career – with Ronaldo beating Neymar to second in the voting, but Ronaldinho is confident the 24-year-old will soon be the game's best.

"Neymar is a friend who is making history in the same club I did and will one day be the best player in the world," Ronaldinho told AS.

"Watching him play with [Andres] Iniesta, Messi and get what they are achieving, for me is a source of great joy."

Ronaldinho believes Barca owe their recent success to the excellent coaching of Luis Enrique, who has won eight trophies since taking the helm ahead of the 2014-15 season.

The Brazilian added: "He is one of the best coaches in the world today, and has the best players.

"It is not easy to get everyone to get along and make everything work as he does. He is rated highly and there are the titles he has won with Barcelona."

Without a club since a short spell at Fluminense in 2015, Ronaldinho has been touring the world playing in various exhibition matches.

The 36-year-old has plans to wind down his career in 2017, but admitted he could well continue beyond then.

"I am thinking about doing something next year to begin winding down my career. I do not know where, my brother [and agent] is looking and we are talking about it," he said.

"We'll see what eventually happens. It might be that I start playing, fear missing the ball and then carry on until I'm 40."