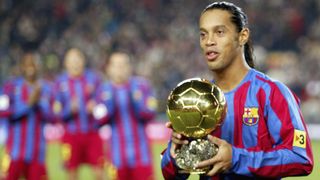 Brazil great Ronaldinho will retire from professional football in 2018 after an illustrious career during which he won the biggest prizes.

Ronaldinho, 37, last played competitively with Fluminense in 2015 and his retirement comes as no surprise.

The 97-time Brazil international is widely regarded as one of the greatest players of all-time after an incredible career at the top level.

We look at the prizes Ronaldinho claimed during his career, having featured for clubs including Barcelona, AC Milan and Paris Saint-Germain.