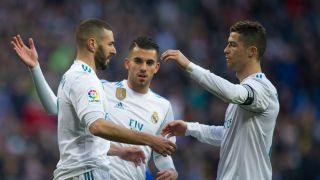 Cristiano Ronaldo's decision to pass up the chance of a hat-trick and let Karim Benzema complete the 4-0 win over Alaves drew praise from Real Madrid boss Zinedine Zidane.

Benzema has endured a torrid season in front of goal, scoring just three times in LaLiga prior to Saturday's game as he leads one of the most vaunted attacks in world football.

Sections of the Santiago Bernabeu jeered the French striker when he lost his footing to skew a glorious opportunity wide with the game locked at 0-0.

But the 30-year-old responded to that setback by creating Ronaldo's 44th-minute opener with a cute backheel and laying on Gareth Bale's strike within half a minute of the restart.

Ronaldo added a superb third but cleared the way for Benzema to convert an 89th-minute penalty after Victor Laguardia brought down Bale.

"I'm happy for Cristiano’s nice gesture with Karim," Zidane told a post-match news conference, having watched his much-vaunted 'BBC' forward line all score in the same match for the first time this season.

"This shows he is a team player. Karim deserved this, to score a goal, as he had played a very good game."

A very satisfying afternoon at the Bernabéu! February 24, 2018

Much of the pre-match focus was on Bale, Benzema and Ronaldo all being named in the starting XI but Zidane set his team up nominally in a 4-4-2 formation, with the Wales international and Lucas Vazquez impressing on the flanks.

As such, the head coach was keen to ensure Lucas received his share of the praise for a relentless offensive performance after half-time.

"The BBC were always there," Zidane said. "They played a very good game, also Lucas Vazquez, the four up-front all played very well. I am happy for the four.

"We will see [if Bale stays on the left] I wanted to see Gareth in this position, then we will see in the following games.

"But at the moment we have more of the consistency that we want in our play, our focus. And that comes with recovering confidence, which is fundamental for a player."

Alaves were on a run of three consecutive wins in LaLiga but the man who has overseen a phenomenal resurgence in form, head coach Abelardo, felt his side ran into a Madrid side on their best run of form this season.

"Their second goal was key, for sure," Abelardo told reporters. "In the first half we had done pretty well but the second goal so soon killed us.

"We've met Madrid at their best moment of season. The game against PSG returned their confidence, which had been missing before."