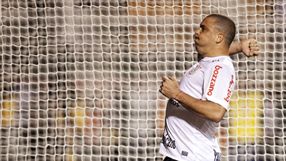 The former Brazil striker, still visibly overweight and unfit after an injury-plagued season, opened his account in the 84th minute when Avai had already had striker Robinho and defender Emerson sent off.

He then converted a 90th-minute penalty after Dentinho had been brought down.

Fluminense, who drew 0-0 away to South American champions Internacional in Porto Alegre, have 58 points and Corinthians 57 with five matches to go.

Third-placed Cruzeiro, also on 57 points, squandered the chance to go top when they were beaten 2-0 at home by Sao Paulo.

Botafogo beat Atletico Goianense 3-2 at home to leave the top four teams separated by only four points as they fight for the title and to stay in the 2011 Libertadores Cup qualifying places.