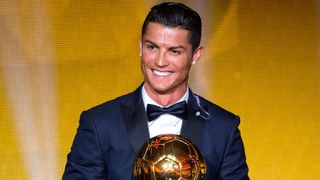 The 32-year-old has won world football's top individual prize three times in the last four years, his most recent coming in 2016, the award's first edition since FIFA and France Football's partnership came to an end.

The Portugal star is favourite to defend the trophy after inspiring Madrid to LaLiga and Champions League glory last season and would join Messi on five career triumphs if he were successful.

And Salgado believes matching the Barcelona great's number of victories would be a momentous achievement.

"I love them both," he told AS. "The fact that we have two players of this level playing together in the same era is something that should be enjoyed.

"What matters is what Ronaldo has done. To draw level on five Ballons d'Or with Messi, because he's going to win the next one, is incredible because the other guy has technical qualities from another world, it's as if God gave them to him with a magic wand.

"But Ronaldo in front of goal is magic."

Salgado won four LaLiga titles and two Champions Leagues during a hugely successful 10-year spell at the Santiago Bernabeu, although they fell short in their efforts to become the first team since AC Milan in 1990 to become back-to-back European champions.

Zidane's side became the first side to achieve the feat in the modern tournament's history when they defended the trophy with a 4-1 win over Juventus in the final in June, and Salgado believes this Madrid team will go on to "define an era".

"The feelings at Real Madrid are really good in every aspect: the coach is the one the fans want, they adore him; the club is at peace because they're winning trophies and everything seems calm," he said.

"It's the opposite to Barcelona, who seem to be a bit unsettled right now.

"I believe Zidane is making his mark with a team who will, without a doubt, come to define an era of world football."