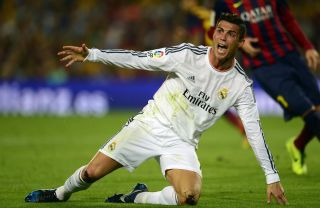 Prior to Tuesday's announcement of the shortlist for the FIFA Ballon d'Or - which included both Ronaldo and Messi - Blatter said in a speech at Oxford University that the Barcelona forward was "a good boy that every father, every mother would like to have at home".

Referring to Ronaldo, Blatter went on to say that "one has more expenses for the hairdresser than the other" before concluding: "I like both of them, but I prefer Messi."

The Real Madrid and Portugal star has now responded to these comments, stating that they demonstrate Blatter's feelings towards him, his club and his country.

"This video shows clearly the respect and consideration that FIFA has for me, for my club and my country," the 28-year-old wrote on his official Facebook page.

"Much is explained now. I wish Mr Blatter health and a long life, with the certainty that he will continue to witness, as he deserves, the successes of his favourite teams and players."

Real earlier called for Blatter to clarify his comments, with coach Carlo Ancelotti describing the remarks as "disrespectful".

Messi has been named the world's best player for the last four years, with 2008 winner Ronaldo finishing runner-up on three of those occasions.