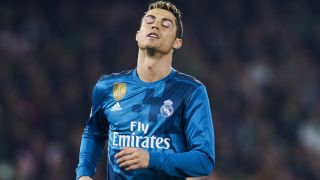 Cristiano Ronaldo has been rested by Zinedine Zidane for Real Madrid's La Liga trip to Leganes on Wednesday.

Zidane hinted he would do so in Tuesday's pre-match media conference, and Ronaldo later posted an image on Instagram of him next to an aeroplane, as he seemingly prepares for a short break.

The 33-year-old has been in red-hot form of late, netting 10 goals in his last six outings across all competitions, but Madrid will have to cope without the Portuguese's services at Estadio Municipal de Butarque.

Madrid lie a whopping 17 points behind La Liga leaders Barcelona and, with their title hopes effectively over, can afford to focus their attentions on their campaign to lift a third successive Champions League trophy.

Luka Modric (hamstring), Toni Kroos (knee) and Marcelo (hamstring) are also absent from the squad to face Leganes, although Zidane said he retains hope all three will be available for their last-16 second leg at Paris Saint-Germain in early March, when Madrid will defend a 3-1 advantage.