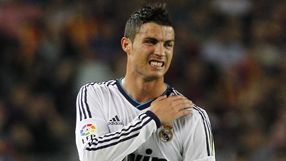 Ronaldo hurt his left shoulder in the second half of Sunday's 2-2 La Liga draw at Barcelona and although he appeared in some discomfort he played on until the end of match.

"The Real Madrid forward was examined by club medical staff at his home this morning and a serious injury was ruled out so further tests at a hospital are not necessary," Real said in a statement on their website.

"Real Madrid have already informed the Portuguese football federation of Cristiano Ronaldo's situation and he can join up with his national team in Obidos," the statement added.

Ronaldo would remain under observation but should be available for Portugal's World Cup 2014 Group F qualifiers away to Russia on Friday and at home to Northern Ireland four days later, Real said.

Ronaldo turned in another imperious display against Barca, netting twice to become the first player to score in six consecutive 'Clasicos' against Real's arch rivals.

Barca's World Player of the Year Lionel Messi also netted a double as the pair continued their personal goal-scoring duel in a thrilling clash at the Nou Camp.

"I have only admiration for him," Real director Emilio Butragueno said of Ronaldo in a post-match interview with Spanish TV.

"He is a born winner and he wanted to finish the game despite being in pain," the former Real and Spain striker added. "Few players bring so much to a team as he is doing."

Ronaldo, the world's most expensive player, appears to have put behind him a period early in the season where he refused to celebrate his goals and admitted to feeling "sad" without specifying why.

Unsourced reports in local media suggested he wanted more money and he was linked with a move away from the Spanish capital to clubs including big-spending Paris Saint-Germain.