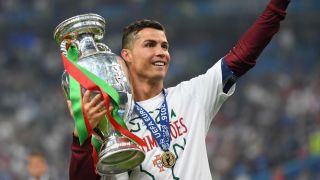 Real Madrid forward Cristiano Ronaldo has been named the joint-fourth highest-earning celebrity of the past 12 months by Forbes Magazine.

According to Forbes, Ronaldo earned $88million (£66m) in the last year, the same amount as US television host Dr Phil McGraw and $6.5m (£4.9m) more than Barcelona rival Lionel Messi, who was eighth on the list.

The 31-year-old, who has won three Ballons D'Or, captained Portugal to European Championship glory at the weekend, despite leaving the 1-0 final defeat of hosts France after 25 minutes with a knee injury.