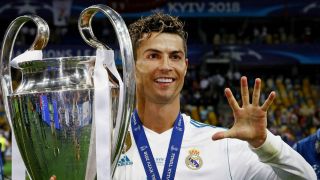 Emre Can has revealed that it would be "great" if Cristiano Ronaldo joined him at Juventus.

Speculation over a transfer worth around €100million to take the Real Madrid forward to Turin has increased in the past week, with a deal thought to be imminent.

Speaking at his official unveiling after joining Juve from Liverpool on a free transfer, Can admitted he would be delighted if the Portuguese superstar joined him at the Allianz Stadium.

He said: "I think for every player it would be great to play with a player like him. I don't know if the club has had contact with the player - I'm just focusing on myself.

"If he came here it would be great, but my main focus is on myself."

Can - who has 20 caps for Germany - spent four seasons at Anfield but failed to win a club honour with the Reds, coming close on three occasions as they reached the finals in the EFL Cup, Europa League and Champions League.

Juventus have had no such bad luck on the domestic front - winning seven Serie A titles in a row - but have now gone 22 years without getting their hands on the Champions League trophy.

While Can concedes that the number one priority is winning the Scudetto, he hopes he can help the Old Lady triumph in European football once again.

"I think the first thing has to be to win Serie A, then the Champions League comes," he added.

"The club hasn’t won for 22 years and, of course, our aim is to win the Champions League - that's why I'm here. I want to help the team, but our main focus is on winning Serie A."