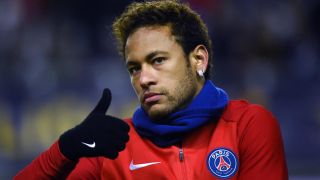 Neymar's decision to swap LaLiga giants Barcelona for Paris Saint-Germain was a step back, according to Brazil legend Ronaldo.

Neymar has starred for PSG, scoring 20 goals in all competitions – 11 of those strikes in Ligue 1 – but in an interview with ex-Brazil international Zico via YouTube, former Barca striker Ronaldo said: "Sportingly, the decision is a step back.

"But there are challenges that everyone seeks.

"I played in Barcelona at the time and went to Inter when the Italian championship was much more competitive."

Neymar was on target on Wednesday as PSG defeated 10-man Amiens 2-0 to reach the Coupe de la Ligue semi-finals.

PSG are back in action against Claudio Ranieri's Nantes in Ligue 1 on Sunday.