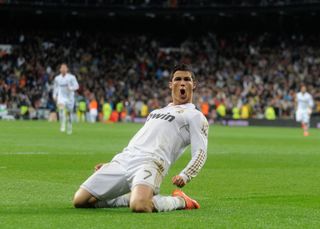 The Portuguese ended speculation on his immediate future on Sunday by committing to a new five-year contract with the Liga giants, despite close-season rumours of a return to Manchester United or a move to Ligue 1 champions Paris Saint-Germain.

And the 28-year-old said that while he does not see eye-to-eye on all aspects with Perez, he had no qualms about extending his stay at the Bernabeu.

"I've never had major problems with my president," the Portugal international revealed.

"It is obvious that many times we do not agree on many things, but it's part of life.

"We talked at the end of last season and I knew that sooner or later I was going to come to an agreement and we are happy."

Ronaldo's new deal reportedly makes him the highest-paid player in world football, but he insists that money was not a motivating factor in his decision to stay at the club.

"I'm happy here and so I renewed," he added. "Virtually everything was already closed, but I left with a good feeling, a feeling of accomplishment.

"It's true that money is important but it is not the main reason why I have renewed.

"I think the club has the dimension to conquer more championships, more tournaments and I feel integrated in this project."