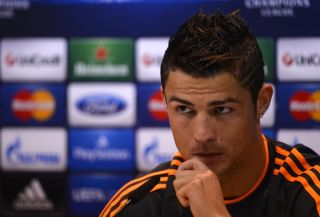 Wednesday's meeting with the Serie A champions is one of two crucial fixtures for the Liga giants this week, with the first El Clasico match against arch rivals Barcelona coming on Saturday.

Real sit third in La Liga behind Barca and Atletico Madrid, but have won both their opening Champions League games convincingly, with a 6-1 hammering of Galatasaray and a 4-0 defeat of FC Copenhagen.

And Portuguese superstar Ronaldo is eager for his side to maintain this momentum in Europe's premier club competition on Wednesday.

"We are getting better. We started a bit weak - we are improving in many aspects. We have to continue like that, we have many big games in important tournaments coming up," the former Manchester United man said.

"The Juventus game is a huge game. We are always thinking game by game. We want to win this one.

"I don't think it is a decisive week but it's true that it is an important one for us. We didn't start as we would have liked but we are getting better.

"We want to win tomorrow as that will also give us confidence for the game against Barcelona at the weekend.

"The Champions League is the most important tournament, but whatever competition I compete in I want to win it."

Real boss Carlo Ancelotti, meanwhile, revealed that, with the exception of Xabi Alonso, he has a fully fit squad to choose from.

"We have all of our players available except for Xabi Alonso - but I am not going to give you my team for tomorrow," he added.

"Sergio Ramos is available - he can play. Angel Di Maria is playing well, he is full of confidence."