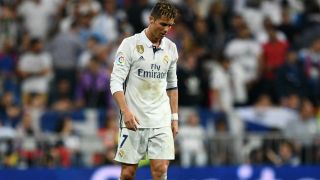 Cristiano Ronaldo has been left out of the matchday squad for Real Madrid's LaLiga clash with Deportivo La Coruna on Wednesday.

The 32-year-old has been excluded from the 19-man squad for the trip to the Riazor, along with midfielder Toni Kroos.

It is reported that both are being given the chance to rest, with Madrid hosting Valencia on Saturday before the Champions League semi-final first leg against Atletico Madrid next Tuesday.

Captain Sergio Ramos is absent through suspension following the red card he received in Sunday's 3-2 defeat to Barcelona, while Gareth Bale is out with a calf injury.

Raphael Varane is back in the squad, however, having missed Madrid's last four league games with an Achilles problem.