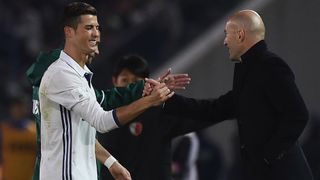 Cristiano Ronaldo saluted Zinedine Zidane for his management of the Real Madrid squad this season as they closed to within a point of the La Liga league title with a 4-1 win at Celta Vigo.

Madrid produced a professional display in Galicia on Wednesday and managed to fend off a resilient Celta side, who were harshly reduced to 10 men in the second half when Iago Aspas was adjudged to have dived in the area.

Karim Benzema and Toni Kroos ultimately finished Celta off following Aspas' dismissal, but it was Ronaldo who set them on their way, scoring twice to effectively put Madrid on the brink of their first title since 2012.

And the Portugal star gave coach Zidane the thumbs up for his effective management of a squad which he believes has a good blend of youth and experience.

"The boss has managed things very well this year," he told reporters. "We have a very good squad with lots of good young players and others with experience.

"I have been rested a bit more this year in order to be in good shape at the end of the season. It has worked well as this is when things are decided.

"We still have one game to go. We know we have to keep going until the end.

"We are going to Malaga to win the game, that's always our objective. We are Madrid; we must show that we are the best team and that we're champions."

Ronaldo could have scored a hat-trick late on but inexplicably missed the target from close range.

"Such misses aren't normal for me," he said. "But it can happen. Human beings can make mistakes.

"But I am doing well and helping the team with goals at the moment, so I am happy."