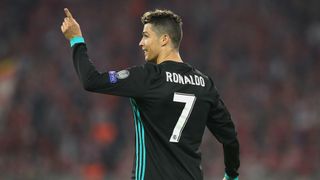 Real Madrid's Cristiano Ronaldo has added yet another record to his collection, becoming the Champions League's record outfield appearance holder.

The former Manchester United star made his 152nd Champions League appearance in the second leg of Madrid's semi-final with Bayern Munich on Tuesday.

That saw him surpass previous record holder Xavi, who played in 151 games in the competition in his glittering career with Barcelona.

Ronaldo's former Real Madrid team-mate, Porto goalkeeper Iker Casillas, holds the record for the most appearances by any player with 167.

Madrid went into the second leg at the Santiago Bernabeu holding a 2-1 lead from the first game at the Allianz Arena.

152 - Cristiano Ronaldo is making his 152nd appearance in the Champions League this evening; the most of any outfield player in competition history (one more than Xavi). Titan. May 1, 2018