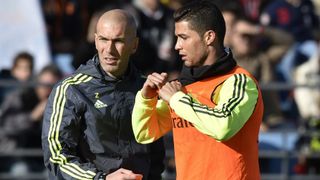 Cristiano Ronaldo should feel intimidated at the thought of being coached by Zinedine Zidane, former Juventus defender Ciro Ferrara has said.

The World Cup-winning former France star was named as head coach of Real Madrid this week following the sacking of Rafael Benitez.

Ex-Madrid boss Vanderlei Luxemburgo suggested that Zidane could be undermined by the Portugal star if he allows his ego to get the better of him during the Santiago Bernabeu icon's spell in charge.

But Ferrara, who played alongside Zidane at Juventus during his own glittering playing career, is confident the 43-year-old will comfortably hold sway in a notoriously volatile dressing-room.

When asked if Zidane may feel apprehensive in working with Ronaldo, Ferrara told Omnisport: "Well, actually I think it should be Cristiano Ronaldo who feels intimidated by Zidane, rather than it being the other way around.

"Obviously this is a new role for Zidane so he has to, slowly, match after match, through the words he says to his squad, gain their trust. Even though at the moment he probably already has their complete and undivided trust, something you automatically have after having been a true legend like Zizou.

"After that he is going to have to find the right way to transfer his philosophies, maybe not many at the start. Especially because it isn't like in Italy, where managers tend to focus a lot on tactics, in Spain they tend to do it much less. But I'm sure that Zidane will have a few tactical ideas that he picked up during his years in Juventus which he will want to tell his side.

"I don't think that Zizou will ever go to Cristiano Ronaldo and tell him: 'Look, you need to kick the ball in this way' or go to Sergio Ramos and tell him how to defend. The players already know what to do and it is then up to the former greats to show intelligence, in order to simply help them get better."

Ferrara does not agree that Zidane, along with other former great players, was destined to become a successful coach but feels the talent at his disposal at Madrid could make his first senior role easier.

"Well, I think that this is actually a myth, that great champions all want to become managers," he said. "I have played alongside great champions and I felt like this was actually the case. They are obviously players that like to have responsibilities on the pitch, even sometimes tweaking a certain aspect of their game that maybe eluded their managers.

"After that it is up to the players to be able to make these calls, and Zizou has incredible players at his disposal and this is going to be a great advantage obviously for him."

Ferrara himself took charge of Juventus for an ill-fated spell in the 2009-10 campaign, while other former Turin favourites including Didier Deschamps, Filippo Inzaghi and Antonio Conte have gone on to enjoy top-level coaching positions in recent years.

The former Italy assistant coach believes playing under iconic bosses including Marcello Lippi and Carlo Ancelotti may well have been crucial to Juve's record of developing coaching talent.

"Honestly I don't know why, but I noticed this statistic a few days ago," he added. "Some have had more luck than others, say, like me, for instance!

"It might be because in those years we had a manager to whom we were very attached and who managed to impart some of his knowledge. But it might also just be coincidence, too.

"Obviously the image and the role of the manager is completely different. You can't think about your own individual performance any more, but instead have to think about all 25 players on your team. And it doesn't stop there as you need to deal with the fan base, the club and even with the media.

"That of the manager is a completely different world from that of the player. When you shift from the pitch to the dugout, with all of the pressure that goes with it, you can't for example take for granted that your players are capable of doing certain things, even if they are top players. Having said this I feel like Zidane is going to be able to get through to his players - as I said before, having such a strong team already he would just need to teach the group a few important, yet very clear, concepts."