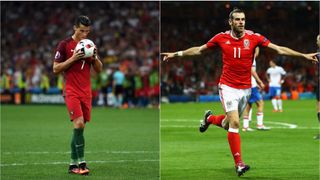 Fresh from helping their club to an 11th European title after a Champions League final victory over Atletico Madrid, the attacking duo have seen their respective nations progress to the last four.

Here, with the help of Opta data, we compare Ronaldo and Bale's performances in France.

RONALDO THE BETTER TEAM PLAYER?
Bale has routinely spoken of the team spirit that courses through Wales' squad, while Ronaldo's histrionics on the pitch have been criticised in some quarters – especially after his one-man nightmare against Austria in the group stage.

However, the players' numbers tell a different story, with Ronaldo appearing to play much more of a role in Portugal's approach play than Bale has in Wales'.

BALE THE BETTER MARKSMAN?
Each the leader of their side's attack, Bale has had much more joy in front of goal, especially from free-kicks, with Ronaldo's efforts becoming ever-increasingly optimistic and from seemingly further out each time.

On the other hand, Bale's first two free-kicks of the tournament found the net, against Slovakia and England.

RONALDO HAS THE HISTORIC EDGE
The two players have gone head-to-head five times before Bale's move to Real Madrid.

Bale played Madrid twice with Tottenham and Manchester United three times and lost on every occasion. Four of the matches were lost in 90 minutes, with the exception being the 2009 League Cup final, which Ronaldo's side won on penalties.