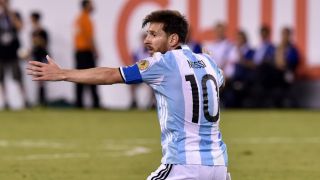 Messi cut a dejected figure after the game, in which he missed Argentina's first penalty of the shoot-out after neither team managed to score in 120 minutes of play, eventually announcing his international retirement to reporters while leaving the stadium.

Ronaldo said everyone needed to respect Messi's decision, but admitted he hopes that he changes his mind.

"It is an extremely personal choice of Messi and we have to respect," 1994 and 2002 World Cup winner Ronaldo told Chinese news outlet Xinhua news.

"We all feel abandoned by Messi, and hope he can change his decision."

The Brazilian great, who played for both Barcelona and Real Madrid as well as Inter and AC Milan, also commented on Brazil's lacklustre performance at the tournament, in which they failed to make the knockout stages.

Ronaldo said his national team can no longer be considered one of football's best after their performance.

"Brazil played badly in the Copa America this year, with wrong plans and [player] choices," he said.

"And Brazil is now very far from the best in this field in South America."