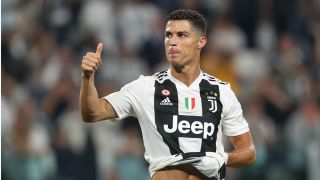 Massimiliano Allegri hailed Cristiano Ronaldo's "best performance of the season so far" after the Portuguese had a hand in all of Juventus' goals in their 3-1 win over Napoli on Saturday.

A seventh straight Serie A win for the Bianconeri means they are now six points clear of second-place Napoli – a lead that could be reduced to five on Sunday should Sassuolo continue their fine start to the season by beating AC Milan.

Napoli took an early lead through Dries Mertens, before Ronaldo delivered a stunning cross for Mario Mandzukic to head home an equaliser.

Ronaldo's shot then cannoned back off the post for the Croatian striker to double his tally before the former Real Madrid man headed a late corner into the path of Leonardo Bonucci to add gloss to the scoreline.

While the 33-year-old missed a number of opportunities to score himself, his coach thinks he should be content with a fine display.

"Ronaldo is enjoying his football, he has integrated very well and he loves an assist as well as a goal," Allegri told Sky Sport Italia.

"He had some exceptional passes tonight and it's all about finding him in the right way.

"I thought tonight and the first half-hour against Valencia represented his best performances of the season so far."

Juve's cause was aided in the 58th minute when Mario Rui received a second yellow card for an ugly foul on Paulo Dybala, but Allegri was furious with his side's reaction to the defender's dismissal.

"Once Napoli went down to 10 men, we stopped playing, and that made me angry," he added.

"We ran a big risk on Jose Callejon's chance and they could easily have equalised.

"We need to be sharper. Playing out from the back, we misplaced a pass and conceded a goal."

Allegri was also quick to play down suggestions that Juve will canter to an eighth consecutive league title, saying: "After this, we still have to play Inter, Milan, Roma and Fiorentina.

"We've got a six-point advantage, but it's a very long season. Also, Serie A is always tough."