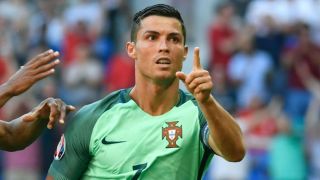 Cristiano Ronaldo exploded into life in Lyon on Wednesday, taking out weeks of pent-up frustration on Hungary to book a place in Euro 2016's round of 16, but the Portugal captain must act soon to salvage his public persona in the face of mounting ridicule.

After a week in which the minutiae of Ronaldo's questionable body language were repeatedly dissected in the merciless laboratory of the global media, a low point was reached when the Real Madrid superstar - who has been followed around by his own personal thundercloud in France - snatched away a reporter's broadcast microphone and threw it in a lake.

These were the actions of Portuguese football's figurehead, a man described by his coach the day before the game as a "standard-bearer", universally loved back home.

If that is the case then, crucial as he may still be to the team's hopes, much of the country must hang their head in shame or exchange nervous sidelong glances when the diva is in full effect.

Always a noted exponent of the visible display of displeasure from his early days at Manchester United, Ronaldo has slipped into the realm of caricature during this competition, unable to mask his displeasure at what had been, until Wednesday, another underwhelming showing on the biggest stage of all.

The full range of ridiculous responses and barely believable facial expressions were on show again early in the match at Stade de Lyon, as events - not for the first time in the tournament - did not initially go the way of the 31-year-old and his indescribably large ego.

A pass that did not arrive, an unfavourable referring decision, Hungary's opener against the run of play - every incident was treated as a deliberate affront, seemingly interpreted as the result of a karmic conspiracy to deny him the legacy of marrying international glory with his glittering haul of club silverware.

Unlike against Iceland and Austria, when ungracious comments and a missed penalty respectively served to condemn him further in the court of public opinion, here was a match where the forward was finally able to apply the balm of a decisive intervention to the open wounds of his pride, vanity and ambition.

First came the inch-perfect throughball to set up Nani's equaliser. Then, Portugal having fallen behind, a technically perfect back-heel finish to draw level again. After that came his well-taken header to make it 3-3.

All that frustration, angst and hereto misdirected energy was finally unleashed and it was all Hungary could do to stay in the game and cling on to top spot in Group F.

Iceland's late winner against Austria left Portugal going through in third place to meet a difficult opponent in the form of Croatia in Lens on Saturday.

For Ronaldo - who created history with his brace against Hungary to become the first player to score in four separate European Championships - it will be another opportunity to make the difference and move a step closer to achieving the international triumph he so obsessively craves.

Do not bet against him doing exactly that, but perhaps along the way he should stop to consider the toll his lack of tact and charm will exact - regardless of what prizes he amasses - on football's collective memory of one of the sport's greatest players.