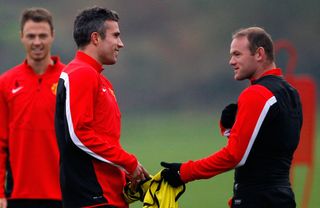 Netherlands international Van Persie has missed the last 11 games in all competitions due to a thigh injury, while Rooney has been sidelined since New Year’s Day due to a groin problem.

Moyes revealed the strike duo trained on Monday along with midfielder Marouane Fellaini, who has been struggling with a back problem and also underwent surgery on his wrist.

And the trio could be back in the squad when the Premier League champions face their former striker Ole Gunnar Solskjaer’s struggling Cardiff City side at Old Trafford on Tuesday.

United have endured a disappointing season so far, but Moyes now has plenty of grounds for optimism following the record signing of Juan Mata and the return of key players.

Rooney and Van Persie played an integral role as United regained the title last season, but the pair have started only 26 games between them in the top flight in the current campaign and have been sorely missed.

Mata trained with his new team-mates on Monday for the first time since his £37.1million move from Chelsea, but Moyes has not yet decided whether the Spain midfielder will make his debut against Cardiff.

Moyes expects Solskjaer to be given a great ovation when he returns to the club where he made his name during his playing days.

The former Norway striker was a fans’ favourite at Old Trafford due to his goalscoring exploits in an illustrious 11-year career at the club, with his late winner in the 1999 UEFA Champions League final victory over Bayern Munich his finest hour.

Moyes said: “Ole will get a fantastic reception and deserves it. He is a legend for what he has done here."