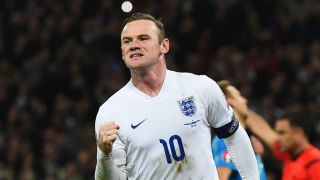 Wayne Rooney has earned the right to enjoy a special England farewell, according to Michail Antonio.

Rooney will make his 120th and final international appearance in a friendly against United States at Wembley on Thursday.

England's all-time leading goalscorer will wear the number 10 shirt and replace Fabian Delph as captain when he is introduced from the bench.

Reaction to Rooney's return to international action after a two-year absence has been mixed, with Peter Shilton - the only player with more England caps - among those to criticise the move.

Players including Wesley Sneijder and Lukas Podolski have been similarly honoured by Netherlands and Germany respectively at the end of their international careers.

And Antonio, part of the England squad when Rooney was still playing for the Three Lions in 2016, backed the decision to hand the DC United striker a shock recall.

"I think with England, we should follow other countries like Germany. He's got 119 caps right now and this last cap will make it special for him," Antonio told Omnisport.

"I feel he deserves this day and any player who plays for England like him who retires should get a day like that as they have given their international duty to us."

Looking forward to putting the shirt on for one last time tonight. My twitter will be taken over until after the game so you can keep track of what’s going on and for info on the charities and how you can donate. Thanks for your support November 15, 2018

Injuries have disrupted Antonio's career since he broke into the England squad and the 28-year-old has only started four Premier League games this season.

Crystal Palace are reportedly among the clubs willing to offer him a way out of West Ham and Antonio accepts he may have to consider leaving London Stadium.

"I'm just trying to play my football right now and whatever happens, happens.