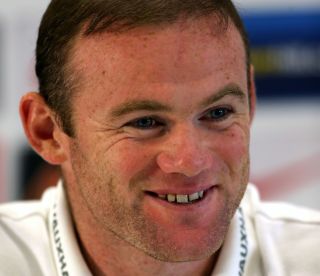 The Manchester United forward is set to lead the line for the crucial FIFA World Cup qualifiers against Montenegro on Friday and Poland next Tuesday.

Daniel Sturridge, Danny Welbeck, Rickie Lambert and Jermain Defoe will be vying to play alongside Rooney, who made his international debut in 2003 and has played alongside numerous strikers for his country since.

But the 27-year-old believes current boss Roy Hodgson has the firepower at his disposal to ensure England secure the six points they need to ensure they top Group H in the European section and qualify for Brazil 2014.

"I think since I've been in the squad this is probably the best group of strikers we've had in terms of ability goalscoring-wise," he said.

"Rickie Lambert has come into squad, he's scoring goals for Southampton and he's done really well for England and then you've got Welbeck and Sturridge and Defoe.

"Me and Jermain have been around the squad for a bit longer and I think with Sturridge and Welbeck, they've got a lot of energy and can both score goals so it's a good blend of forwards."

Rooney was absent for England's last two qualifiers against Moldova and Ukraine due to a head injury, so the former Everton man is relieved to be back for two games of such huge importance.

"Missing games is disappointing for any player but to come back for these two games it's exciting. I'm really looking forward to the challenge of wining these two games.

"We have two home games and we go into the games knowing if we can do that we're through. We will certainly be trying to get the two wins.

"These are two mass games to try and get our country to the World Cup."