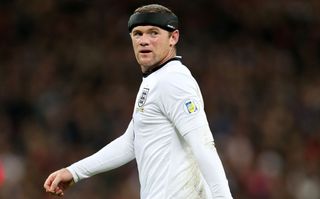 Roy Hodgson's side face Poland at Wembley on Tuesday needing a victory to ensure their participation in next year's FIFA World Cup in Brazil.

A 4-1 victory over Montenegro on Friday means England have a one-point lead over Ukraine in Group H, but Mykhaylo Fomenko's charges face a seemingly easier task in the form of minnows San Marino.

But Rooney is in confident mood ahead of the meeting, and also allayed fears over the future of English football by pointing to the example of Tottenham winger Andros Townsend, who had a memorable debut with a goal against Montenegro.

"We have to reach the finals first, but I am sure once we do that the manager will have a few games to prepare for the tournament," the 27-year-old said.

"I think all the talk about 'there's not enough good English players' - well, we have got six, seven or eight young players.

"Andros did great, he's an exciting player with a great future and then you have (Danny) Welbeck, (Daniel) Sturridge, (Phil) Jones, (Chris) Smalling, (Jack) Wilshere, (Alex) Oxlade-Chamberlain, (Theo) Walcott - the players we have got there, there's some talent.

"So, we are happy with the squad we have got and are looking forward to the future."

As Rooney looks to the future, one player who is reaching the twilight of his international career is Chelsea midfielder Frank Lampard.

Brazil is likely to be the last World Cup the 35-year-old will appear in, and Lampard is determined to aid England's cause against Poland.

"It is a huge game. For me, for everyone. Not just the fact it may be my last World Cup, it is the fact there is an England team wanting to get there," Lampard added.

"Brazil is one of the homes of football. We believe we are the home of football but if you look at (the) history (and) the flamboyance.

"We played there in the summer and you could feel the magic around the place. If you are playing for your country you want to be there.

"There is a lot of desire. Me and Stevie (Gerrard) have been here a long time.

"I don't know, Stevie may have aspirations to carry on in an England shirt but for us it is a huge thing. It will be fantastic in Brazil and an England team not being there would be a bad thing. I think it is pushing all of us on."