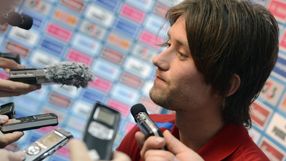 The 32-year old playmaker, who last played for the Czechs against Greece at Euro 2012 where he injured his Achilles', has also been troubled by a calf injury this season and returned for club side Arsenal at the weekend.

"I saw Tomas in the FA Cup at the weekend and he has lost none of his qualities," coach Michal Bilek told reporters.

The Czechs are third in World Cup qualifying Group B and face Denmark and Armenia in March.