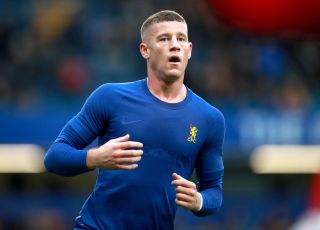 Barkley has just shaken off a niggling foot injury and forced his way back into Chelsea’s first team picture, and impressed in the Blues’ 3-0 Premier League win over Burnley.

Lampard criticised the 26-year-old earlier this season for lacking professionalism after a row with a taxi driver in Liverpool, but has now insisted Barkley remains central to his Stamford Bridge plans.

“He’s played the last couple of games and done very well. I’ve got a lot of faith in Ross.

“That was news I heard just like everyone else, but there’s absolutely no feeling towards that here. I’m very happy with him.”

Inter Milan are understood to be pushing hard to sign Olivier Giroud this month, but Lampard insisted that no deal has been agreed with Chelsea.

“If everything is right it might happen but it’s not, so whilst it’s not he’s our player,” said Lampard.

“And the great thing about Ollie is that he’s got great experience and professionalism, and he’s been nothing but great with us.”

Reece James signed a new Chelsea deal this week, committing himself to his home club until 2025.

And Lampard hailed the 20-year-old full-back’s signature as a big coup for the Stamford Bridge club’s long-term future.

“I rate him very highly, I knew him as a youth player in the academy here,” said Lampard.

“I saw him on loan last year where he did fantastically well at Wigan.

“I tried to get him to Derby but he couldn’t come in mid-season. But I admired him a lot. And then work with him, I feel the same, and even more so now he’s got his foot into the first team.

“I think there’s a lot more to come from Reece James, a really talented player.

“Like a lot of the younger players, he wants to learn, improve, train and do the right things. And he has that talent, so it’s great for the club that he’s signed for so long.”

Lampard also revealed Chelsea are not on the brink of any January signings, despite the club casting around for new recruits this month.

“I’m not going to be embarrassed by anything happening soon; there’s nothing.

“What remains the same is that the window is open and if there’s anything when can do to improve us then we will attempt to do it. We are working on that, but also I’m very aware of how I want the squad to be and how much we must focus on what is our job in hand, which is winning matches.

“We’ll keep working and there may be news. I’m not closing the door as such, but it has to be right, in January.”