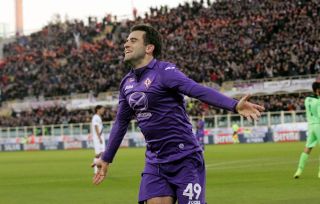 Italy international Rossi has been unavailable since January when he suffered ligament damage in his right knee in a Serie A clash with Livorno.

Fiorentina had been hopeful of having the forward available for the club's Coppa Italia final with Napoli on May 2, and that may now be possible after he came through full training on Tuesday.

Rossi's return will also be a boost for Italy boss Cesare Prandelli ahead of the FIFA World Cup in Brazil later this year.

Prandelli has previously claimed he will give Rossi every chance to prove his fitness ahead of the tournament in Brazil.

Mario Gomez is also targeting the Coppa final, but reportedly remains on a different training regime.

The German missed five months earlier in the season with a serious ligament injury, also in his right knee, and his return in March proved brief as he suffered a sprain to his left knee in a 1-0 win at Napoli.

Fiorentina currently sit fourth in Serie A and look set to claim a spot in next season's UEFA Europa League.