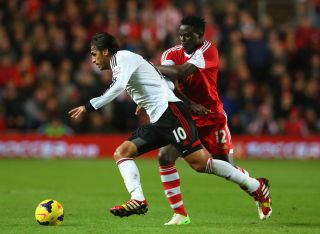 The London side looked to have put a shaky start to the Premier League season behind them when they followed a 1-0 win over Stoke by beating Crystal Palace 4-1 last Monday, only to be halted in their tracks at St Mary’s.

Martin Jol's men were sunk by first-half goals from Rickie Lambert and Jay Rodriguez in a 2-0 defeat and now find themselves 14th after nine games.

With a League Cup match against Leicester City preceding a clash with reigning league champions Manchester United, Ruiz is targeting a swift return to form.

"After winning two games in a row, we wanted to continue that at Southampton," he told the club's official website. "We weren't able to do it and we were all disappointed with the display.

"The most frustrating thing was not testing their goalkeeper. We should have done more but Southampton have only conceded three goals this season and they’re very strong defensively.

"We've got two games coming up quickly and it will be a tough week. We want to qualify for the next round of the cup and then take on Manchester United in a good frame of mind."

Ruiz has been struggling with a back injury lately, but is hoping to be fully fit in the near future.

"I still have some problems with my back and we're working on that. It's getting better - hopefully in the next couple of weeks it will be 100 per cent," he added.